Arch Linux on a Picocluster 5

There a several different options for the clusters. I chose to go with Odroid C2's over the standard Raspberry Pi's because they have twice the RAM which is important for playing with Spark and Hadoop, and also Gigabit ethernet instead of the Pi's USB/ethernet bottleneck. There a several different size options available. I chose to go with a 5 node cluster as it came with a switch and seems "more serious" than the 3, while the 10 node cluster seemed like overkill. 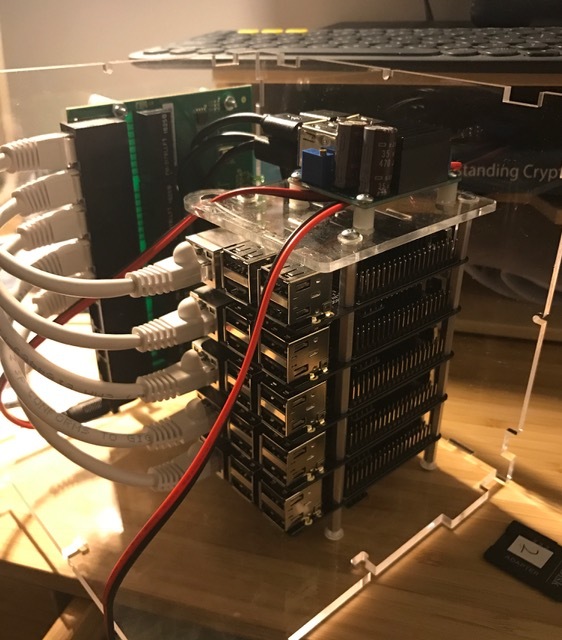 For the base operating system I discarded the default images and went with Arch Linux ARM. This was because the base image provided came with Ubuntu, X.org, and MATE, and felt too heavy. I followed the instructions for preparing the image but made sure to give static ip addresses for each node by editing the default eth0.network. The details here depend on how your router is setup with mine using the 192.168.0.0/24 range.

After booting I also configured hostnames, setup sudo, and ssh keys on all the nodes.

My next goal was to install docker swarm on the cluster, which allows docker containers to be deployed and load balanced across a distributed set of nodes.

I installed docker on the master node and wrote simple scripts like below to install on every node.

Note that with recent versions of docker like the one provided by Arch, you don't need to install docker swarm separately.

Next I created a swarm on my master node pc1:

And then let the other nodes join the swarm through the provided docker join command. Running docker node ls will let you see an overview of the swarm.

Because the servers have an ARM architecture, they will by default not run standard Docker images. There is a good list of some ARM centric docker images provided by Hypricot and also good information on their blog. As a simple example, the below runs a whoami service provided by port 80 on all ports.

We can see this service running on pc2.

Now let's scale this to 5 replicas.

You can see the service running by running curl -4 http://pcX on any of the nodes.

For more information check out the Docker Swarm docs.