Recently, there has been a move away from Apple due to signs of stagnation. What once was one of the best developer laptops, has now shed its ESC key and well and truly become a consumer device. Though I still use a Mac at work, I've now moved to Linux for my home machine.

As a technologist, dicussions about tool choice, especially in something as core as an operating system, are seen as so important that they tend to become political, or even religious in tone. This is never really helpful as people close their minds to alternative viewpoints. Below is intended as just a description of my journey and how I have moved back to using Gnome and Linux.

My reasons for using Linux are centered around freedom. Having a computer that in under my control and not the other way around is very important to me. The coming war on general purpose computation is on our doorsteps, and there is a very real threat we will find ourselves locked out of what we have created.

I see running a free operating system, and writing free software, as sometime I can do to make the world just a little nicer. Something revolutionary, but something you can do on a lazy Sunday afternoon.

A bit of history

Historically, the last time I used Gnome was nearly 10 years ago. It was on a cheap laptop I bought that came with Ubuntu. The desktop (Gnome 2) was definitely not pretty, but it did the job. I was productive and it could handle all of my university work.

A couple years later, I was seduced into a Mac laptop after seeing a functional UNIX terminal underneath the glossy operating system. This led to a period of time I will now refer to the "lost years".

I would periodically install Linux on something, usually a cheap netbook that could run a tiling window manager (like dwm) nicely, but that spluttered on a web browser due to a lack of CPU and RAM. However I was never truly satisfied by the experience, and invariably had to just "get something done" and so went back to my Mac.

I decided what I really needed was:

So I picked up a Gigabyte NUC. These are tiny desktops that generate virtually no noise, are moderately upgradeable, relatively inexpensive, and have a variety of CPU options. They also have great support for Linux due to using Intel wifi and an integrated GPU. I bought one with an i5 CPU, loaded it with an m.2 SSD card, some RAM, and installed Fedora. 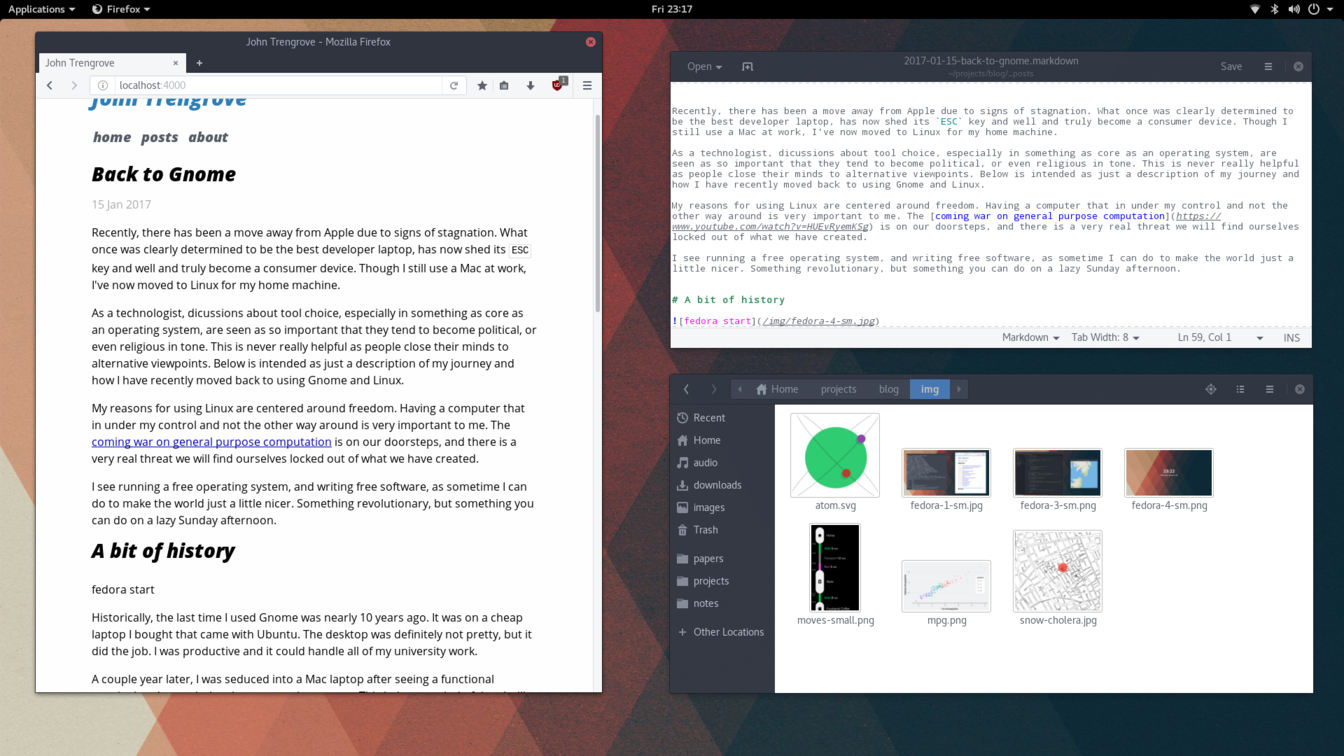 It all worked exceedingly well!

Gnome 3's main aim is to get out of your way. The interface is bare, but fully functional. The main way you interact with it is through the Activities pane. Initially it shows an Expose-like overview of your windows, but as you begin typing it will suggest applications. To an advanced keyboard user things become very quick: for example <Start>f<Enter> will start Firefox and <Start>t<Enter> will open a terminal.

Fedora was a great distro choice due to it providing a full Gnome experience with up to date packages. I'm sure I could do the same on Archlinux but have quite liked Fedora and it has been far easier to setup. The dnf package manager is growing on me and you can find most of what you need (though I still love the concept of the AUR and pacman). I wasn't satisfied with the default theme and so installed the brillant Arc Darker theme, the Arc Darker Firefox theme and Gnome Tweak tool. With these small changes I was pretty happy with the environment.

I've been looking through the Python GTK 3 docs and making graphical applications seems quite nice in Gnome and it is great how everything integrates with my theme.